We uploaded a new strip this week on Tuesday about the PC online game, Guns ofIcarus. In the accompanying blog, my brother mentions that we've been working on for a while... more so planning than working, I would say. I've never played the game but I've seen my brother play it, and now our oldest brother has joined in to battle other players in the virtual sky. I think it's a cool game, I just play a lot of other games at the moment instead.

With our most recent strip, I found it very challenging to draw. I was even beginning to start hating the damn strip. Once I began to work on the backgrounds and special effects, watching it all come and string together, I began to to really appreciate and enjoy drawing it. I realise now the only thing that really bothered me about drawing this strip were the ships, because they have very intricate, complex designs... but they do look cool.

When I showed my brother the near completed strip, he sat down to watch me finish the rest off. He was very happy with it and said that it's the best strip I've drawn so far. I'm not sure if I can agree with that, it's a tricky question to ask myself since I like most of my strips. I do like this one a lot myself and I really do appreciate it a lot more when I look at it. Despite how challenging it was, it seriously only took me about three, maybe four hours to draw which is good for me... this isn't including the sketch time though.

Not to sound like an arrogant douche, but after finishing this strip in particular, it's made me realise just how far I've actually come as an artist and in particular, as a cartoonist. There won't be a new strip tonight, instead what I've done is collected old comic strips I have drawn back in 2008 and 2009. It's hard to believe that these things are four to five years old, but it's nice to look at. These old strips make me remember why I want to be a web cartoonist and well, I think it shows in my new work just how bad I'm chasing this.

Step into my Delorean and let's go, back in time...

This one was kind of having a go at both Break.com and deviantART. Break.com got a new layout ages ago and a lot of people didn't like it and at the same time, so did deviantART. It looks okay now, but deviantART's new layout when it first came out was horrible. Both of 'em look okay now, or maybe I've just gotten used to them.

This is just immature. I look back on it now and I'm laughing in an "Oh this is awkward" kind of way, which isn't a good funny. It was a comic to try and introduce the four characters all at once. With the other two characters, I've yet to use them in my new comics, but I would like to soon.

This one was back when Blu-Ray and HD-DVD were kinda battling it out, but HD-DVD was clearly losing. A mate of mine kept claiming that HD-DVD was going to win and at the time, it was a very good and realistic argument but in the end, Blu-Ray won. I have no idea what the hell the difference is. 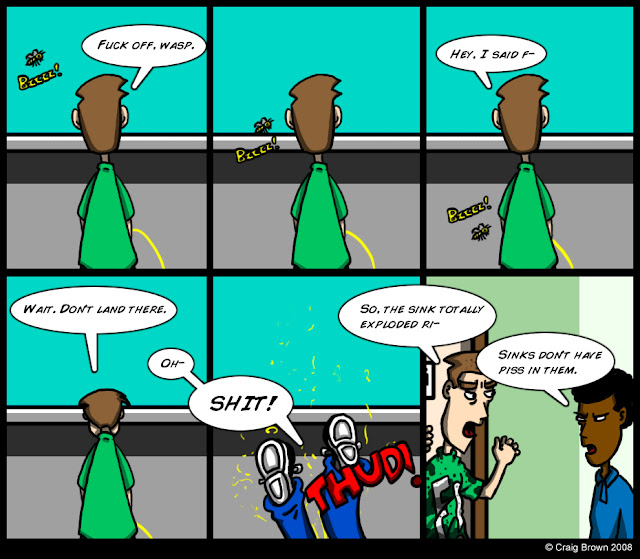 And my immaturity continues to show. The most retarded thing about this strip? I got the idea when I was drunk, taking a piss. Yeah, I know.

Oh look at that, I finally started using the copyright thingo on the bottom right.

You know, for a hopeful comic that was about geek culture like video games and stuff, this was my first comic that I drew that was actually about a game. I really liked how this one came out too, despite being drawn in low resolution like all of my comics back in the day (tip: draw high resolution, seriously). I always found the character creation in Fallout 3 really dumb, in a funny kind of way.

This wasn't a very funny strip at all. Seriously. But I always wanted to draw a conversation taking place over Skype or something while they're gaming.

Wow. I feel terrible about this one, but I still laugh at it, which makes me even more terrible. This one was a parody strip having a go at the infamous and very controversial "Loss" miscarriage storyline of the gaming webcomic Ctrl+Alt+Del. Since it's a parody, I tried to replicate Tim Buckley's art style at the time.

I'm not sure why I used an alien chest burster. I was even thinking about making that chest burster a reoccuring character somehow, back in the day. 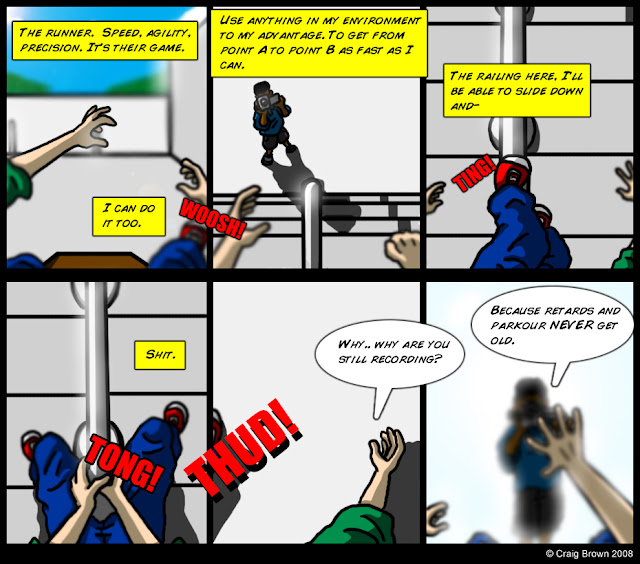 Hah! I finally came up with a name for my comic which I've dismissed, nowadays. "n3rdc0r3"

On a serious note, I had no idea at the time that "nerdcore" was actually a genre of music. I was stuck without a name for a long time, but my brother suggested "Reckless Abandon". At first, I didn't really like it but over time it grew on me and I adored the damn name.

This strip is about the 2008 release of Mirror's Edge. It wasn't a great game and it wasn't a bad game either. It had good new, fresh ideas but unfortunately it wasn't well executed. I remember having so much fun drawing this strip. I tried to replicate the style of Mirror's Edge, first drawn from a first person perspective, then using bright, clean colours similar to that of the actual game. The title of the strip itself comes from the theme song of Mirror's Edge, "StillAlive"... not Portal. Absolutely beautiful song, by the way.

I swear I could have come up with a better title for the strip than "I love me some A.I". It's bloody terrible.

This strip is based off an actual situation that happened to me in Fallout 3, which I am willing to bet has happened to other people as well. With Star Paladin Cross of the Brotherhood of Steel, she loves to run around with her damn power hammer. I ordered her to use a gun instead for ranged combat. So we find that giant behemoth super mutant that's trapped in the cage. After disabling the power, Star Paladin Cross decides it's a good idea to put her gun away, get out her hammer, then charge inside the cage at the behemoth.

I can still feel the rage dwelling within me.

This one wasn't very funny either. It was more or less an experiment to draw a comic strip with a different panel layout and also experiment with lighting and shadow.

The idea came to me while I was in a lecture back in one of my classes at university. Don't ask.

I have no idea why the second panel has changed text... What a n00b.

I used to work in retail years ago at JB Hi-Fi (like Australia's version of Best Buy) as a video game salesman... fitting right?

While at work, the song Stop and Stare came on over the shop. I heard this guy walk past and say to his mate "Ugh! I fucking hate this stupid song so much!"

I just thought it'd be funny if someone heard him, got offended and decided to do something about it.

This is one of my favourite strips I've ever done, which I am considering redoing in high definition. I found it strange that a lot of web comics out there made a strip about Resident Evil 5, but they all dived into the controversy the game caused with its apparent racism. I thought it'd be a good idea to make fun of Chris' newly acquired gigantic arms instead because seriously, that's hilariously awesome. He's so awesome that he punches boulders! He really does it!

When I drew this strip, I got in touch with Roger Craig Smith via e-mail, the actual voice actor of Chris Redfield for Resident Evil 5. I sent him this comic strip in my e-mail and he thought it was hilarious.

I was a massive fan of DragonBall Z as a kid. Hell I still like it, that Battle of the Gods animated movie coming soon? I so want to see that.

The DragonBall live action movie that was released a few years ago? What the hell were they thinking?

The idea of this comic seriously came to me when I woke up at 4 AM one night, the first thing I did was grab my art book, scribbled down this idea then threw the book back down on the floor and went back to sleep. I woke up, saw the idea and thought to myself, 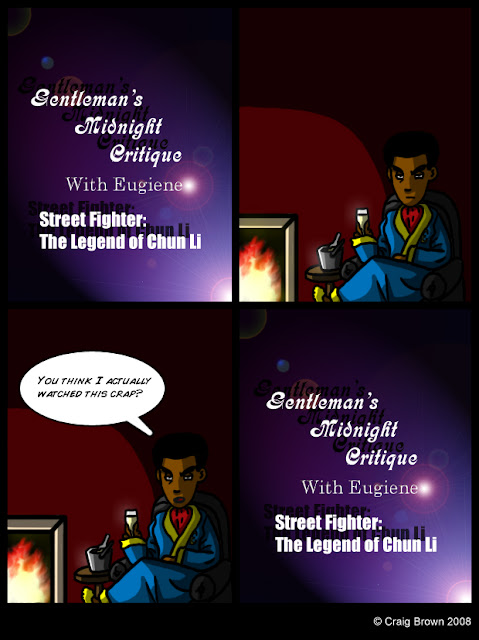 This one was inspired by Penny Arcade, how Gabe and Tycho are often suddenly the hosts of their own show, like Tycho's "It's toodamn late".

I tried to watch this movie at my friend's house. I couldn't do it. It was just that bad. I had to stop otherwise someone would have died, and it wouldn't have been me. 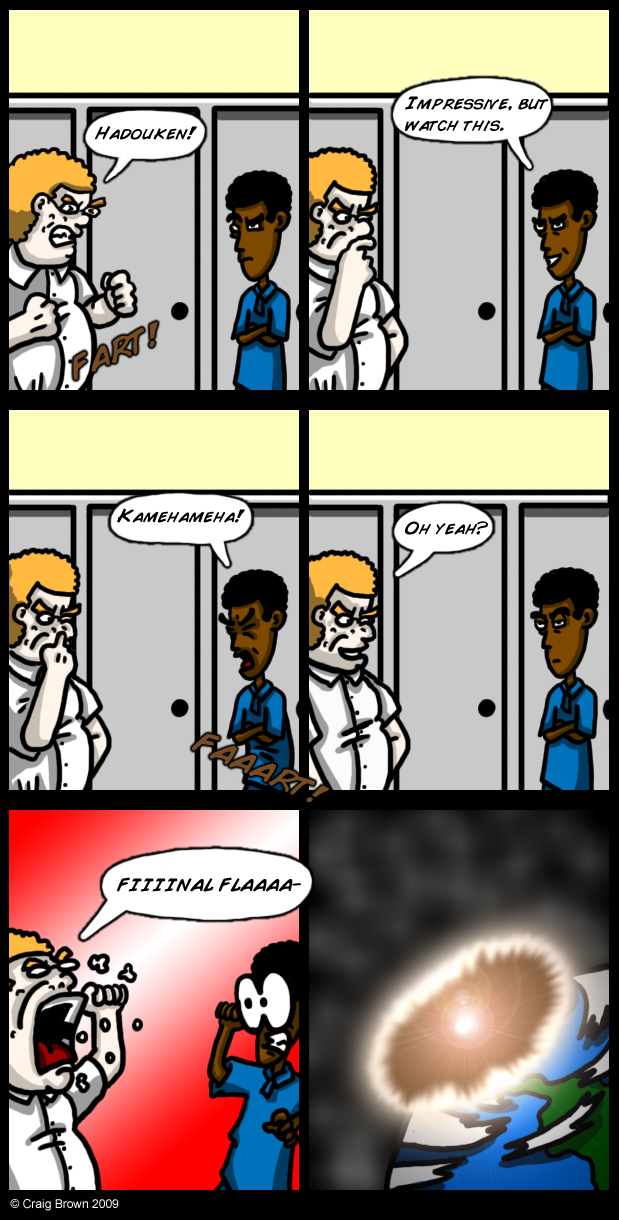 Yup. It's about DragonBall Z again.

Doesn't get much better than that, does it?

With this one, I tried to hand draw the speech bubbles but... my god they look fucking terrible. 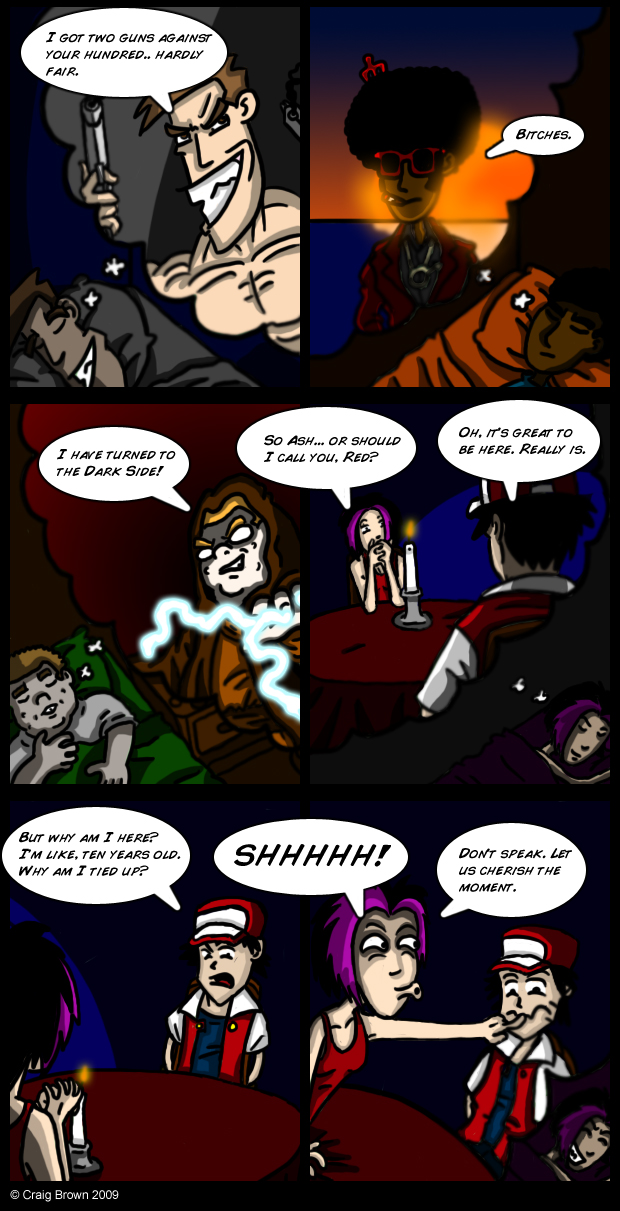 Again this was another strip to kind of introduce all the characters together. Not at the same time, but in the strip, just suggesting what they dream about. With the girl, I wanted her to be a sort of... goth/emo wannabe character who harbours a secret obsession for the Pokemon games. I wanted to explore that and I may do so again in the future.

But this strip is really creepy. 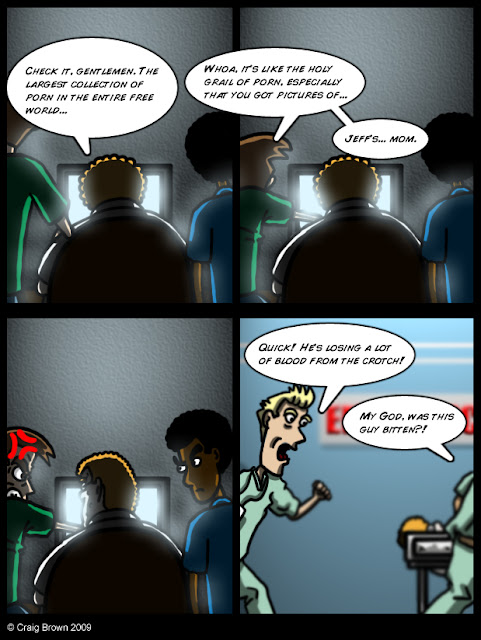 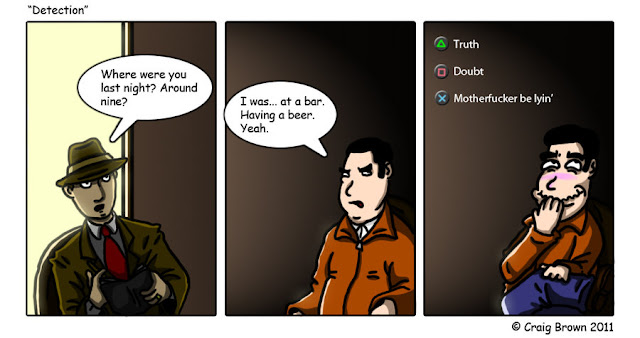 Whoops! I lied. Turns out we have one comic strip from 2011. Wow. What a way to make a comeback Craig. This one is of L.A. Noire and how a lot of NPCs really do lack a poker face when they're trying to lie. 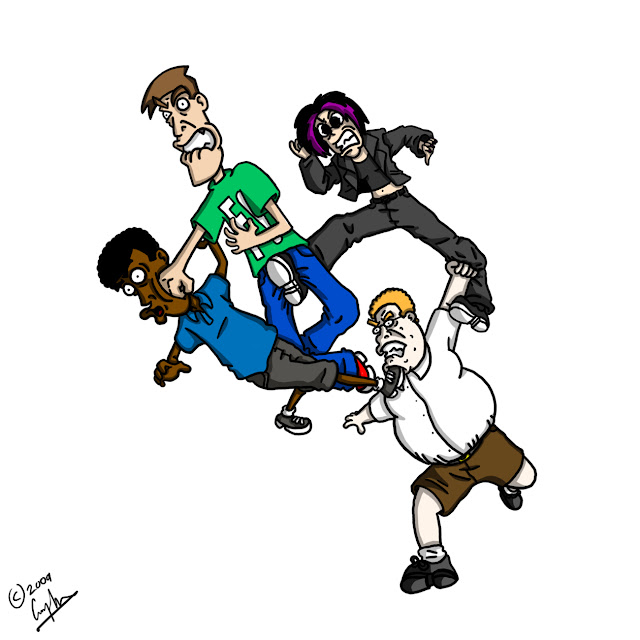 I lied again. One more drawing! This was drawn back in 2009 as a sort of promotional art for my comic, featuring the four main characters. I call this piece "The circle of friendship".

So that's it... eighteen comic strips from 2008 and 2009, with one from 2011 as well as one promotional drawing from 2009. My style is relatively the same for the most part, but the style at the very least has improved over time, as has the quality of the work. I used to work at low resolution and purely digital, meaning I used my old Wacom Intuous3 graphics tablet and just draw straight into Photoshop. I used to draw low resolution because it was a bit quicker and easier but also, I didn't even consider the idea of printing nor did I know about the benefits of high resolution.

Nowadays I sketch the strips onto pre-made A4 panel print outs first before scanning it up onto my computer in Photoshop where I use my Wacom Cintiq graphics tablet to digitally ink and colour the strip. Strips today are drawn at high resolution, just in case I want to print them but also they just end up looking a lot nicer than low res drawings.

It's kinda nice to look back at all these old strips.. I hope you got a chuckle or two checking out some of my old works. We'll have a new strip up next week.

Have a great weekend everyone!

Reckless Abandon
Reckless Abandon is an Australian based gaming and pop culture web comic created by brothers Craig and Morgan Brown. We're currently in production of an official website to host our work, stay tuned! Any questions or comments? Feel free to e-mail us - RAcomic.au@gmail.com - comic updates Tuesdays or/and Thursdays.